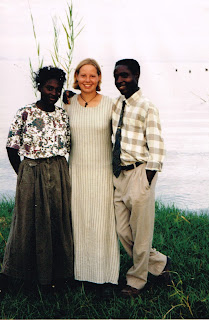 You know how kids have all of these crazy ideas about what they want to be when they grow up?  Everybody I knew wanted to be something cool, like an astronaut or firefighter or clown or dolphin trainer.  My friend, Trisha, wanted to be President of the United States (and a fine president she would be).  Being an overly intense and somewhat precocious teenager, I wanted to be a missionary in Africa.  As soon as it was legal, I started working at a frozen custard stand and squirreling away money to go to Malawi.  I somehow managed to save the funds and convinced my parents that it was a good idea for me to go to Africa for the summer.  This is a picture of me when I was 16 in front of Lake Malawi (which borders the northwest corner of Mozambique).  This was the first of a number of trips that I took to Africa throughout the years as I continued to feel compelled to pursue this dream.

As I reflect back on this winding path almost 15 years later, it's amazing to think that the Mozambique Initiative Coordinator is exactly what I wanted to be when I grew up.  Although I couldn't have put my finger on it then, I realize now that this job is exactly the one I wanted.  I know that I am extremely privileged in many ways and not everybody has been given the opportunities that I have been given, but the point of this is that it's not naive to hold onto your dreams.  It's not silly to think outside of the box.  It's not childish to strive to be everything that God made you to be.  What do you want to be when you grow up?
Posted by Sarah at 2:51 PM